An interview with Ellyssa Kroski about VR programming

An interview with Ellyssa Kroski about VR programming

Once the stuff of science fiction, augmented reality (AR), virtual reality (VR), and mixed reality (MR) are already being incorporated into library programming at hundreds of academic, public, and school libraries across the country. Ranging from simple gaming activities utilizing VR headsets to augmented reality tours, exhibits, immersive experiences, and STEM educational programs, many of these exciting ideas are collected in Ellyssa Kroski's new book 32 Virtual, Augmented, and Mixed Reality Programs for Libraries. In this interview she talks about why she thinks these kinds of programs are a natural fit for libraries and also offers an overview of the technology.

Congrats on the new book! Virtual reality has been around for a number of years, so what made you decide that now was the right time for a collected volume on programming?

Ellyssa Kroski: Thank you! Yes, it’s true that VR has been around for a number of years as a bleeding-edge technology but the equipment and software compatible with it hasn’t been comfortably within reach of consumers until the past few years. Now that it is, libraries have been steadily adopting it, first as an extension of their gaming programs, and more recently as a way to enhance library tours, events, and exhibits as well as to offer engaging programming. 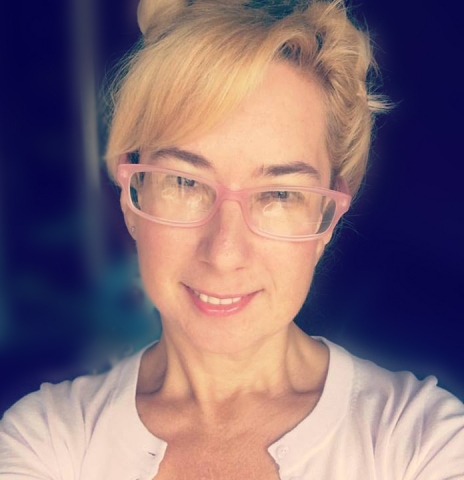 I thought that this was a perfect time for a collected volume on programming as the technology’s continuing popularity has motivated many libraries to seek out ways that they can incorporate this into their own programs. As well, the technology has reached a significant tipping point within the library realm, providing plenty of programs, examples, and experiences for discussion, which has made a book such as this possible.

Did you have a “eureka” moment, back when the technology was really new, that convinced you that this kind of programming was a natural fit for libraries?

Ellyssa Kroski: My first experience with virtual reality was during a Playcrafting game developers’ event in 2015 held at Microsoft’s offices in Times Square, NYC. The event featured unreleased video games and I had a chance to demo a very early developer’s Oculus Rift headset and I just remember thinking that Star Trek’s holodeck wasn’t far off. I also remember getting incredibly seasick after only just a few minutes of gameplay, but wanting to jump right back in. I knew that this technology was going to be popular, and I knew that the tech would continue to evolve.

As far as a natural fit for libraries, I did indeed believe from the get-go that this was something libraries would embrace for their programming and collections since libraries have been embracing gaming for many years. What I didn’t immediately foresee were all of the additional inventive ways that libraries would be implementing this type of technology including providing educational opportunities with it, enhancing their outreach and marketing efforts, and utilizing it to develop exhibits, etc.

Very briefly, how would you describe the differences between virtual, augmented, and mixed reality?

Ellyssa Kroski: Virtual Reality encompasses simulated gaming and educational experiences that are viewed through a specialized VR headset which provides images and sounds immersing the viewer in an artificial world. Virtual reality hardware includes equipment ranging from inexpensive Google Cardboard viewers to costly Oculus Rift and HTC Vive headsets. Virtual Reality is being used in libraries for gaming programs as well as training and educational programs that utilize applications such as Google Expeditions and CoSpaces to provide virtual field trips to landmarks and art museums, driver safety programs, 3D coding environments, and even simulated space exploration. These programs may involve organizing workshops, establishing lending programs, or teaching patrons to utilize their own VR equipment.

Augmented Reality incorporates virtual information such as images and videos as overlays on top of real-world environments and objects that can be viewed through the camera on a mobile device. AR programs in libraries encompass enhancing library exhibits, creating interactive book displays, engaging history programs, guided library tours, and scavenger hunts, as well as playing games such as the wildly popular Pokémon Go. Other programs may teach patrons how to design their own augmented reality layers with free applications. 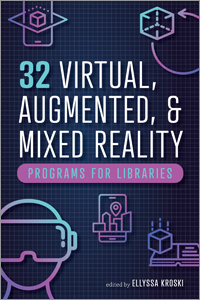 Mixed Reality is a hybrid technology combining virtual reality and augmented reality to produce new environments and visualizations. Although still bleeding edge, libraries may choose to educate patrons about this technology and accompanying equipment including headsets such as the Microsoft HoloLens and new Google Glass.

As you were putting the book together, what surprised you the most?

Ellyssa Kroski: I think most surprising was the abundance of educational programs that libraries have developed incorporating VR, ranging from art and anatomy education to immersive field trips to faraway places, cultural expedition experiences, and even programs incorporating the experience of war. Librarians have been incredibly creative and resourceful with their VR programming, and it really shines through in this volume.

Where do you see things, five years from now? Do you think this sort of technology and programming will be ubiquitous at all kinds of libraries, or will cost and expertise still be barriers?

Ellyssa Kroski: I think that five years from now librarians will have come up with another slew of outrageously ingenious applications for this technology and it will be time for a second edition! As usual budgets will come into play, but libraries have already started to sidestep these barriers by utilizing inexpensive VR equipment such as Google Cardboard and other viewers that cost as little as $10 or less as a proof of concept. And as far as expertise, librarians are constantly learning how to stay ahead of the latest trends and will continue to do so with this as with any other popular technology.

2023: it's in the cards
Cassell and Hiremath's updated introduction to reference and information services
Find the Perfect Gift for Everyone!
Making the connection: Amanda L. Folk and Tracey Overbey discuss libraries and the Black and African American experience
Moving beyond the basics: an interview with Allison Hosier about information literacy instruction
"Keep the literal and figurative lights on; cockroaches hate that": Michael Cart on YA lit, censorship, and his new book
“We need to have difficult conversations, but they should be respectful ones”: Belinha S. De Abreu on media literacy and social justice
An interview with Jeanie Austin about library services and incarceration
"Making mistakes is such an important part of the learning process": an interview with Thomas P. Mackey and Trudi E. Jacobson about metaliteracy in a connected world
"Diversity of identities should be a celebration, not a burden": an interview with Jessica Anne Bratt