Homelessness and libraries: an interview with Ryan J. Dowd

Homelessness and libraries: an interview with Ryan J. Dowd

Posted by Admin Admin on 01/08/2018
Administration, Management, and Finance
Buildings and Facilities
Marketing and Outreach
Public Library Programs and Services

It may surprise you to hear that staff at public libraries interact with almost as many homeless individuals as staff at shelters do. But as Ryan J. Dowd, who has spent most of his career as Executive Director of a large homeless shelter near Chicago, observes, "Libraries are one of the few places in a community where everyone – homeless and not homeless – are likely to mix." He advocates for an empathy-driven approach to these individuals in his new book The Librarian's Guide to Homelessness.

You open your book by discussing some of the myths surrounding individuals who are homeless. In your view, which myth is the most pervasive and damaging?

What is the Homeless Golden Rule and why do you write that it's the most important thing in your book? 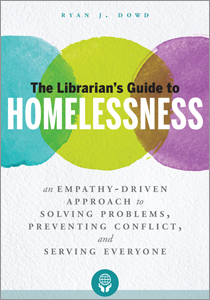 When there's a difficult situation to deal with, often one's default is to immediately shift into problem-solving mode rather than taking a moment to empathize. What are a few pieces of advice you would give librarians for confronting difficult situations with empathy?

The first step is to slow down. Talking to an angry patron (homeless or otherwise) is uncomfortable, and so people try to rush the situation in order to get out of it. This is a mistake. Homeless individuals are constantly rushed and ignored, so when you try to rush the conversation, you send a clear message that they are not worthy of your time or attention. This is a trigger that escalates the situation, which–ironically–causes the confrontation to take much longer than if you took a little time to listen. So few people take the time to listen to homeless patrons. When you do that, it really resolves a lot of problems down the line (and saves time!).

Let's say a library patron approaches you to complain about a homeless individual. So now you have two overlapping situations to handle. What do you do?

The first step is to determine whether the non-homeless patron's complaint is legitimate. At one library I talked to, the patrons call the police every time a homeless patron even enters the library. That is simply an elitist misunderstanding of the role of the library as the last truly democratic public space in our communities. On the other hand, if the non-homeless patron has a legitimate concern (e.g. sexual comments) then that is a totally different matter. So, basically, if the concern is legitimate, then library staff should address the problematic behavior. If the concern is not legitimate, library staff should do their best to explain the role of libraries in serving everyone across the socio-economic spectrum (easier said than done, of course!).

On a day to day basis, how does librarianship's advocacy role fit in with serving the homeless?

What are some first steps that libraries can take to partner with outside organizations?

Learn more about Dowd's book at the ALA Store.

Though fictional, The Public, a new film written and directed by Emilio Estevez, deals with these very real issues. The opening film of the Santa Barbara International Film Festival, it stars Taylor Schilling, Alec Baldwin, Jena Malone, and Jeffrey Wright alongside Estevez. It centers on a group of homeless library patrons in Cincinnati. When brutal weather fills the city's emergency shelters to capacity, they refuse to leave the downtown public library at closing time, leading to a standoff. Check out the official trailer below.